I’m attempting to update the Phenom firmware to 2.11 using the instructions at

but I’m running into an issue during the process.

I’ve attempted to power cycle the printer, and run through the process again, and get the same result. The linked video for the update process skips over the chitubox f211.gcode step, installing only the fpga CBD fiel and then the update.lcd file. I tried this as well, no luck. I also tried two other memory sticks formatted fat32 and ntfs, a fresh copy of the firmware files, and tried creating the stick/copying files from both a mac and two windows PCs…

As of now the information screen version reads “V4.2.22_LCDH /3740x2160 /F2.11” , and the printer does function, but will still only read cbddlp files and not the CTB format. What’s happening, and how can I get the complete set of update files in? ctb files are substantially smaller and seem to process from the slicer much faster, so this would be great to have.

Make sure you clear out Chitubox from any version before installing the intended on:

Here is how:
Chitubox often has leftover files from previous versions and sometimes it corrupts new versions. Factory reset does not always work. This is how you can get a clean Chitubox installation:

1 Uninstall ALL chitubox software on your computer
2 Delete all the leftover files in AppData\Local under user directory
There may be more than one directory and the name of the directory always start with chitu
3. install the chitubox version you want, we recommend Chitubox 1.6.4.3 Beta as it has built-in Phenom profiles and is less crash-prone with larger model files

This step does not work. I have this document already and went through all listed steps as well as my own troubleshooting efforts.
Expected result is that update.LCD will install and restart the printer, and the information screen will show “V4.3.4_LCDH” but what I have is “Unknown file format”, no install or restart, and the info screen still shows “V4.2.22_LCDH”

This step does not work. I have this document already and went through all listed steps as well as my own troubleshooting efforts.
Expected result is that update.LCD will install and restart the printer, and the information screen will show “V4.3.4_LCDH” but what I have is “Unknown file format”, no install or restart, and the info screen still shows “V4.2.22_LCDH”

After the installation is complete, shut down and restart.

I have - several times. The final step is not installing, the update is not completing. I am not able to print .ctb files.

it is step one that is adding the CTB functions, not step 2/3. And in the update instruction, it also mentioned that users coming from 2.9 may not able to update the LCD file since it is the same one.

how to upgrade Phenom firmware to F2.8

Warning, upgrade firmware will reset home position to default. If you use custom z-zero position leveling, you may have to set it again. 0 Download and extract all the files from F2.8 file firmware-latest.zip here ...

Finally had a chance to check this. Same result reverting to 2.8 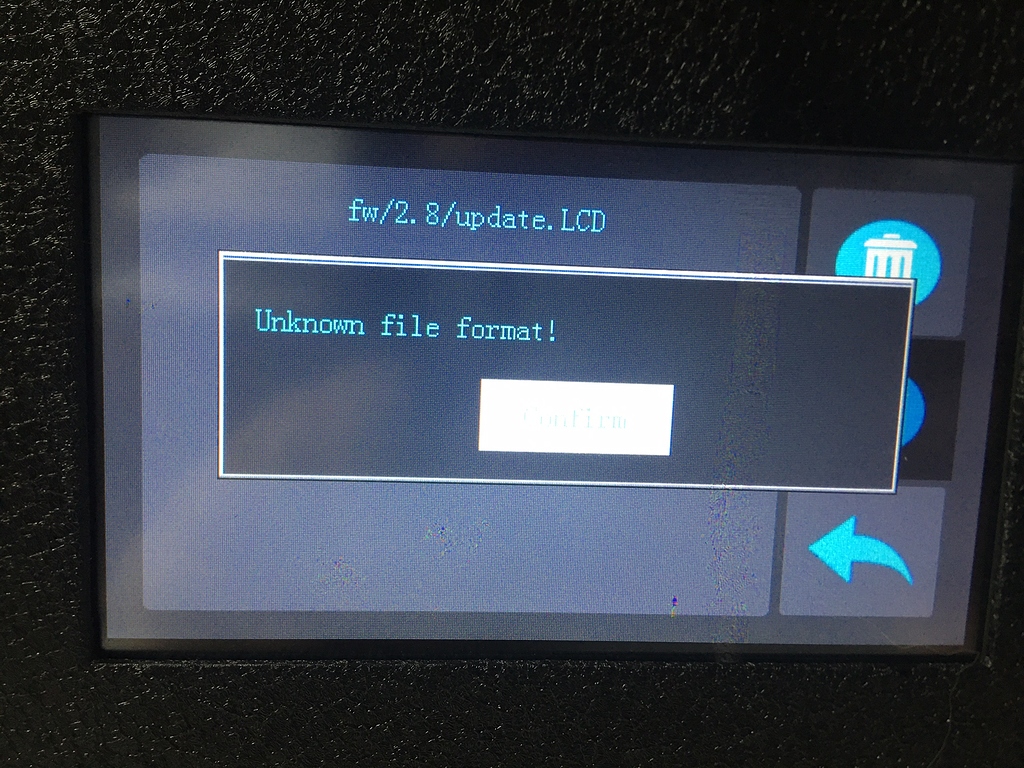 Restarting the printer, I can see from the info screen that 2.8 is active, retry the above steps, no luck with “update.LCD”
So, I try the 2.11 files, assuming the older update.LCD is what’s already in as mentioned. 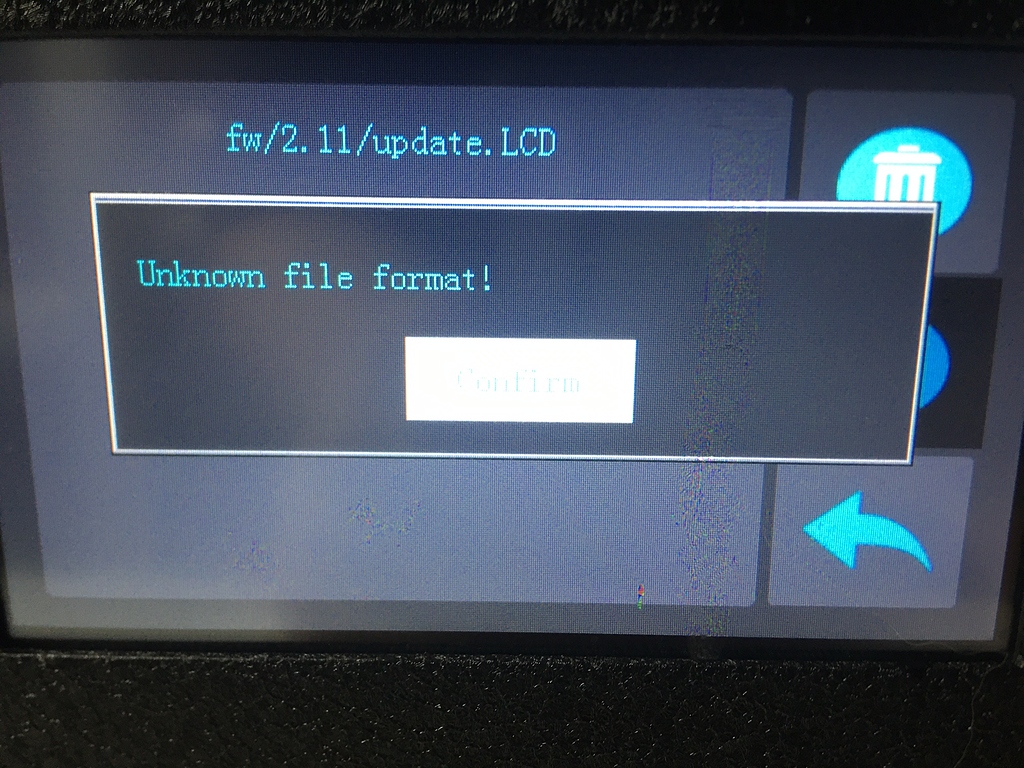 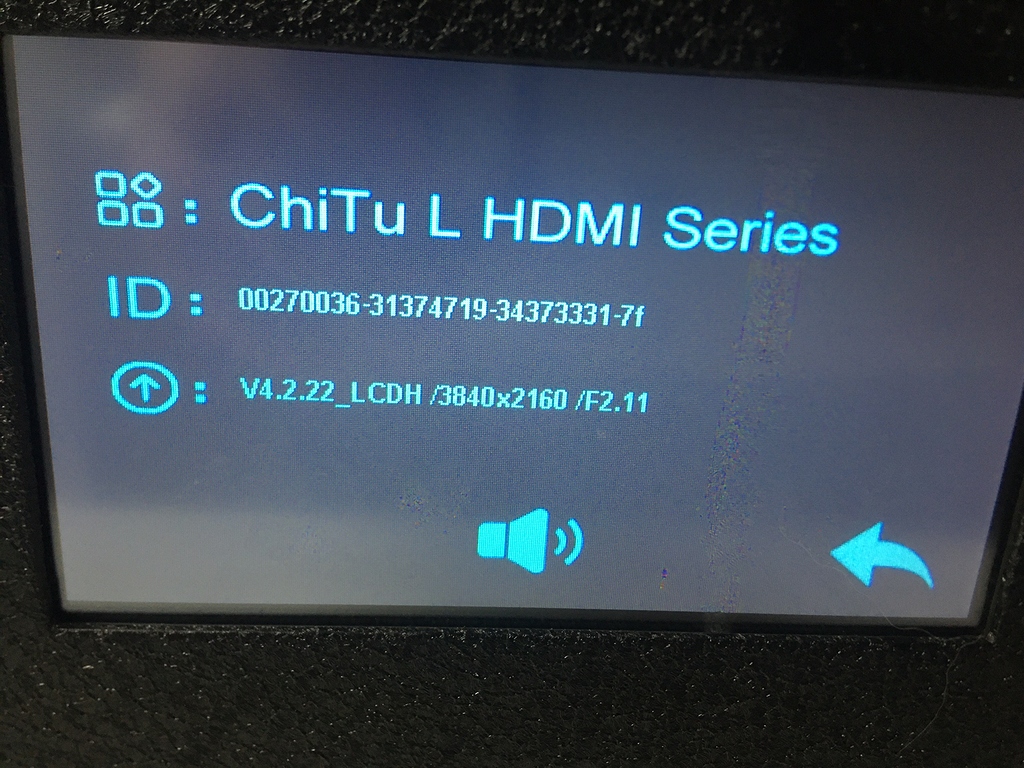 This is being done with the original USB stick that came with the printer, and various other sticks formatted in windows as well as with the sd card formatter. The printer is also not able to print ctb files but only cbddlp

it is unknow file format because it has to be in root directory.
we recommend you try again with F2.11.
also make sure you grab the one for Phenom L. it is not the same as Phenom

Thank you! I initially had the files in a folder…giving me the same “unknown file format”. Moving all files to USB root fixed it.

As a followup, despite having done all the “known to work steps” verbatim and numerous times with numerous USB sticks and computers, I recently decided to give this another shot and the process went through without an issue. No idea why it worked this time.