New phenom not sticking to plate

Had my phenom 2 days now and have yet to get a successful print. I am using prima tough Abs like resin as the parts are mechanical. I have been printing this with 8 second layers in a photon but need to scale up our production hence the upgrade.

To start with I followed the instructions and tried the test print but only a few of the cubes stuck to the build plate. I then tried a few of my own parts Using the exposure I use on the photon of 5 base@ 50s then 8s per layer in the middle of the plate but nothing stuck to it. I tried at 10s and 12s. I checked the build plate with some paper and it seemed ok but I relevelled it anyway. Still nothing sticking. I removed the tape from the screen as there was a lot of overlap on it and seated it so it was really smooth and then relevelled. Each time I checked with paper all the way round. I’ve tried a few of the test cube prints now and each time just a few stick. 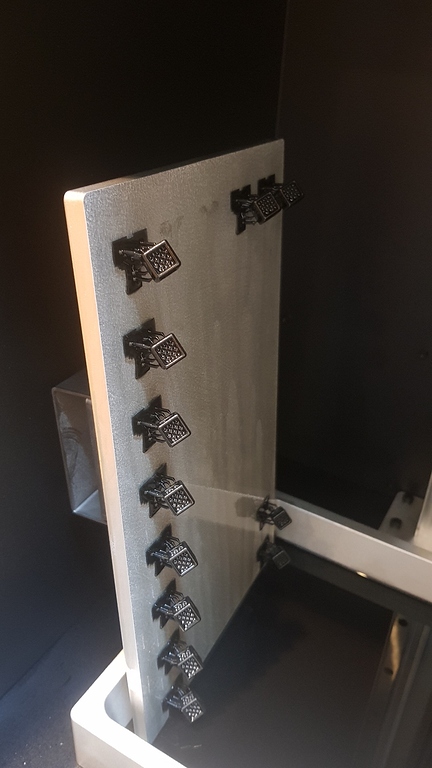 6D8C0A23-1DEA-495A-B02B-D0092E9AC0C6.jpeg1440×2560 657 KB
Between each I am using the fep clean file which pulls off nicely with all the failed cubes so I know the exposure for the base is long enough. I have even resorted to sanding the plate but they still don’t get any better than that.
I also checked the calibration image and it looks ok.
I was disappointed to see that I had the flat build plate in mine so I have ordered the sloped one, wondering if the new plate might fix it.
This is frustrating as I have been printing with a cheap photon and now with a 2 grand printer I can’t even manage a test print!
Any suggestions as to what I can try next? I’m about to change the fep to the spare but I can’t see that fixing it.
Chris
peopoly_support3 June 8, 2020, 7:18am #2

I contacted support, filled out the survey form and provided pictures.
I was told that the platform is not.level and try to relevel it. I’ve done this after every failed print!
I was then told the temperature might be too low and to add a heater. Ideal temperature should be 28!
28! That’s ridiculous, does this not seem far too high? Is anyone else printing at such a high ambient temperature?

Hi, the test printing model in the USB disk is based on peopoly’s Deft grey resin printing test. The printing temperature of 28 degrees is more favorable for 3D printing. If the temperature is too low, the resin viscosity will increase, which will increase the difficulty of printing. I don’t know what resin you are using now. In any case, increasing the drawing distance and reducing the printing speed are beneficial to improve the printing success rate. The following are the third-party resin printing parameters, which may be helpful to you

Resin guide: Here we cover various topics about resins for Phenom, including 3rd party resins and layer height - “Can Phenom print 3rd parties resin?” is probably the most common question we got. The answer is: Maybe Phenom’s exposure control...

…was just about to order a machine, but I’m concerned if the materials are not yet developed I’ll spend frustrating Hours trying to get the setup to work.
Are Peopoly not plug and play?

I assumed it would be a useable as my photon which prints with anything.
It seems very picky about resin and I have been unable to print yet with my usual abs like black.
Very frustrating for such an expensive printer.
In theory siraya blu should mechanically give me what I need so have some ordered some but ideally I need to print in black. Wonder if I can die it?

Losen the 4 screws and remove vat for calibration. Push home button so plate comes down and now place 4 same weights on the corner (bottle f. E.) and tighten the screws, go up by 0.1mm manually and save this as homeposition. Worked perfectly for me… The magic is calibrating it Directly on the display and then going up by 0.1mm

Peopolys calibrating instructions didn’t work for me. The trick was going up 0.1mm, try it should work

I also had trouble with the first few prints and it was also with an ABS-like resin (HERO). I also tried the “leveling” instructions that were supplied by they are not very good.
[One of the misnomers is even calling the process “plate leveling” when really what you’re trying to do is get your build plate perfectly parallel with the LCD panel. The plate “level” is usually never the problem, it’s usually the LCD panel does not sit perfectly and securely in the well.]

Anyway, the method that worked for me was very similar to what schupik2012 describes above but with empty vat installed.

Now, if you start using resins that either cure harder or are more flexible you’ll need to adjust your lift speed (less speed) and lift height (more height). Think of it this way, say you wanted to peel a car emblem badge off the car and you just grab and yanked it then two things can happen: 1) you pull off a chunk of paint with your emblem, or 2) the emblem breaks into pieces. Same goes for stickers and decals. Anyway, for the HERO ABS-like resin, I changed the lift speed to 24 mm/min for bottom and 36 mm/min for normal. The bottom exposure time was 5s longer than published and the normal exposure was 2 seconds longer. They’ll be optimized later when I am more comfortable and want to speed up the print. Right now, it’s just about getting things to print reliably. 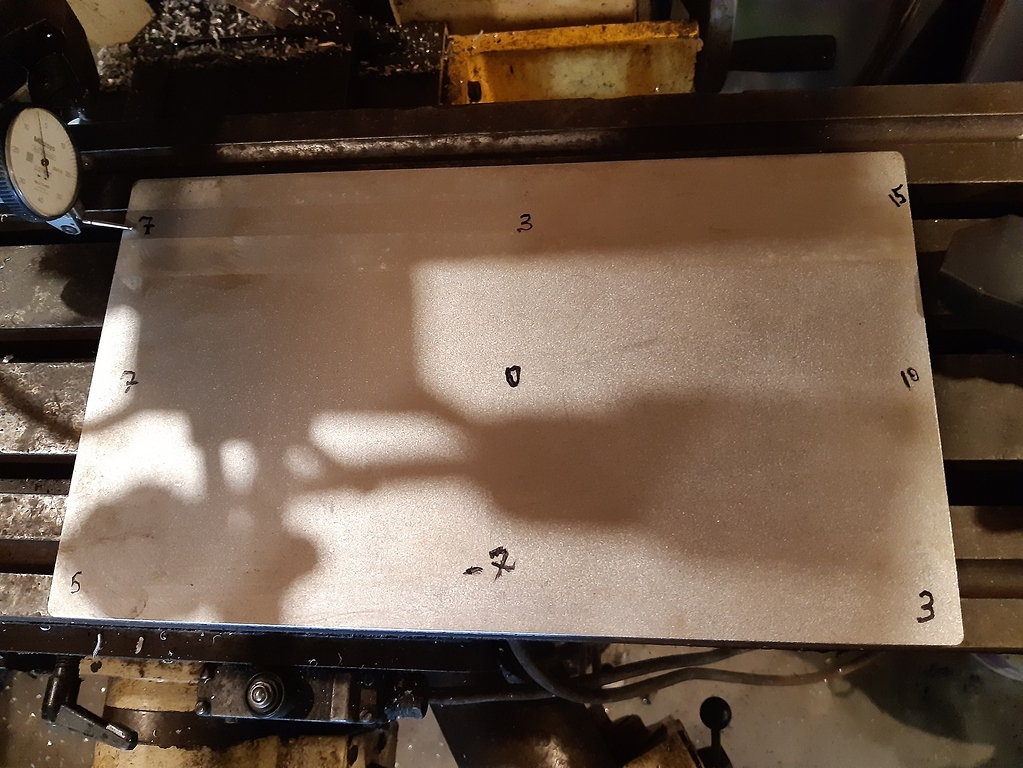 Now i know why i cant make prints in 150X85 mm, 3 pcs. on the buildplate, there are several areas where the material is not sticking to the plate, its like it falls, and make unusable prints, i have measuret the plate in my mill, and the biggest difference is 22/100mm!!! or 4,4 layer, so i am sure that i dont got contact with the plate, these phenom people are making a nice buildplate, with a sand ( or corund ) blast surface, it looks good, but it seems that they dont know that the blasting deforms the plate, blasting can bend it very much.
the picture shows my measuring, i have just checked the same area on my mill without the plate, and it is under 1/100mm, just to be sure…
I would make the same edges on the buildplate, on my 14 days old machine, like on the new machines, where the resin runs back in the vat, instead of fillig the hole top…

Thanks for all your input. Couple of things i noticed. My build plate is similar to yours arttex, it is not totally level.
Also take a look at my lcd screen with an engineering ruler on it. There are gaps at the ends and the middle of the ruler so the screen isnt level either. You may need to open the image in a new tab to see the full width. 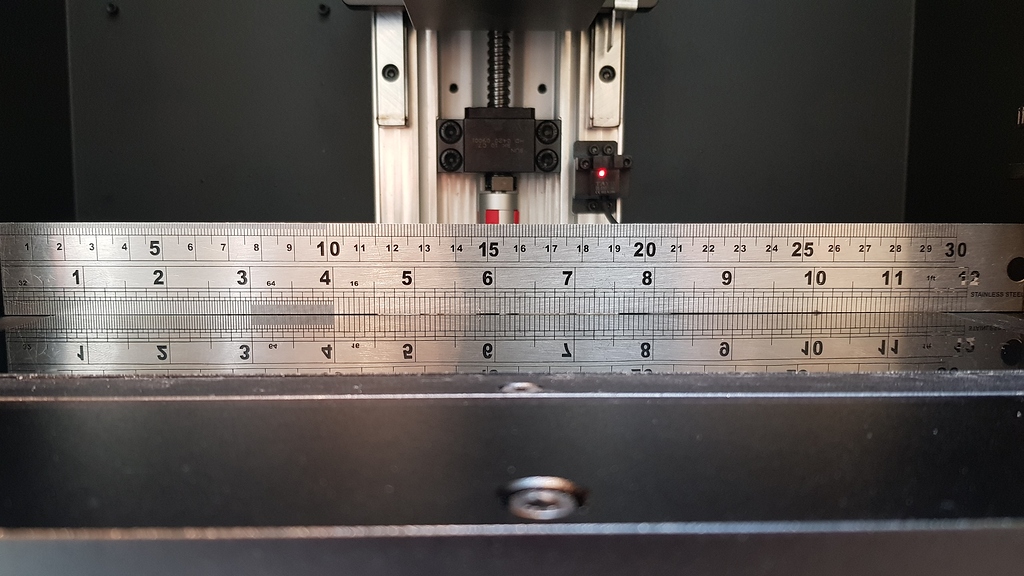 Now I had already ordered the new sloped build plate which is flatter than the included one so I am going to try your lift speeds again using that plate Archjoe.
Not impressed with the quality control on a 2 grand printer so far.

I do have some siraya blu on the way which I may end up having to use instead of abs black. We will see about that next week though.
Am off to try your settings.
Thanks
Chris

Thanks for the documents but I have already seen them when I got the printer. They don’t affect the poor quality control and the fact the the screen and the build plate are not flat. You can see that my screen is wavy.

A further update on this.
I tried again with siraya blu and the peopoly profile but it is just the same. So I removed the screen and metal frame and checked them for level on a flat surface. You can see from this picture that the screen bows down in the middle so it will never touch no matter how many times i level the plate. The plate touches at the edges but there is always a gap in the middle. The metal support plate also bows in the middle too. 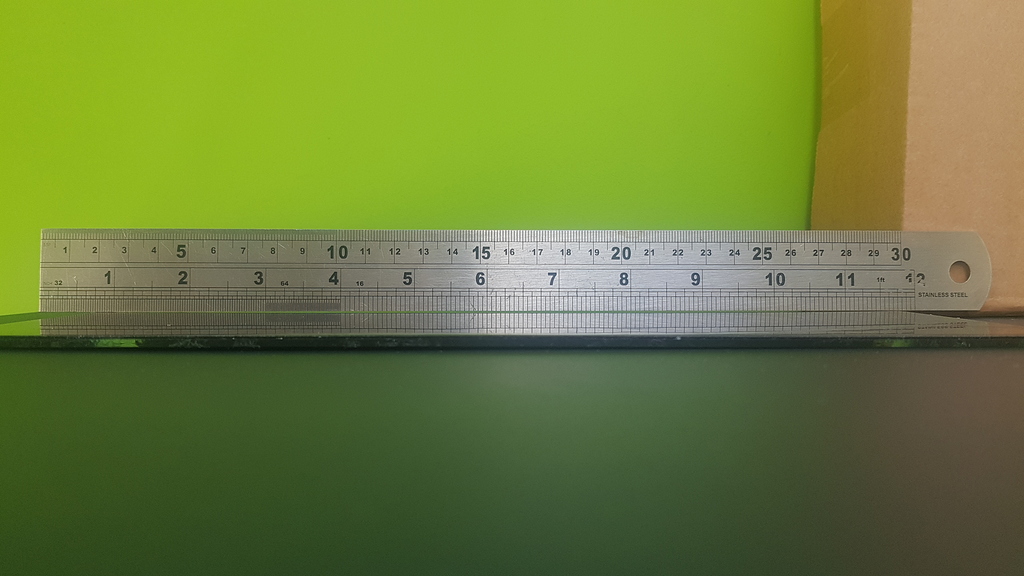 Now i have modified the buildplate, the upside is like on the printers 14 days newer than mine!!! and the build-site is plan, so now the resin have a change to glue all over. I liked the original sandblasted finish, but now it must be like this, better a plan plate than a nice finish. 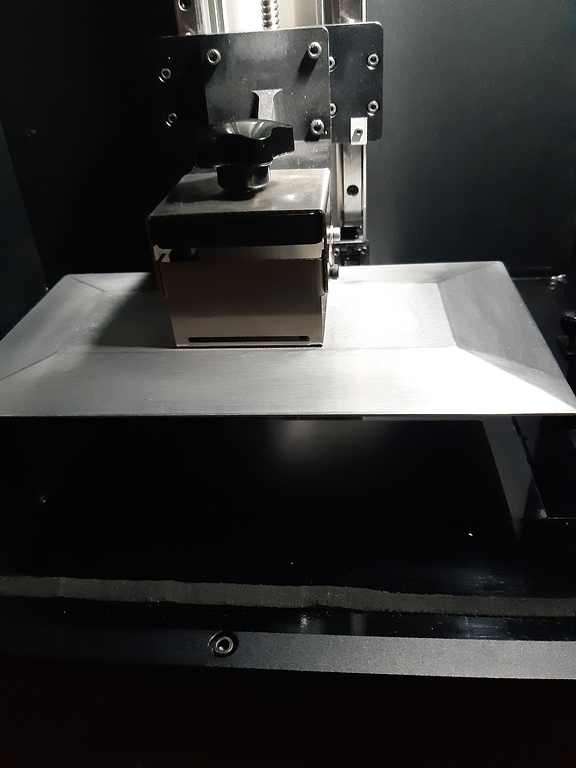 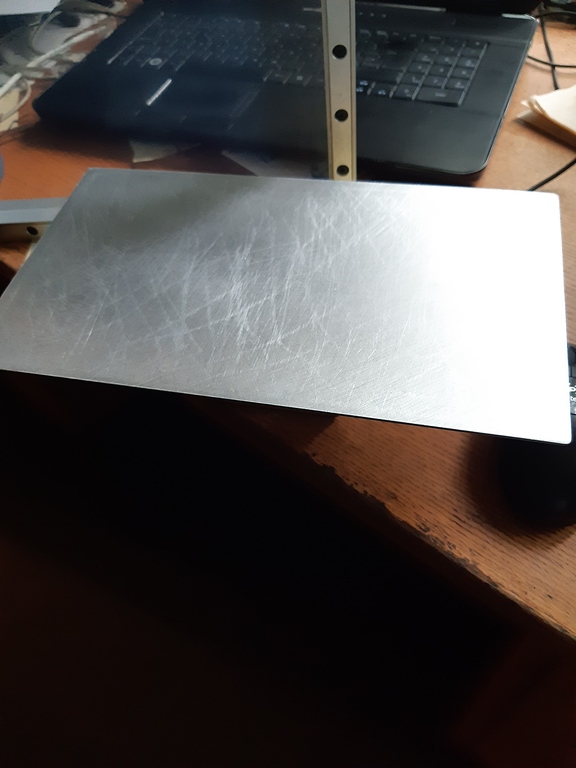 Better feeling with aligning buildplate, its easier to feel how the plate align to the screen.
Carsten Blom Denmark 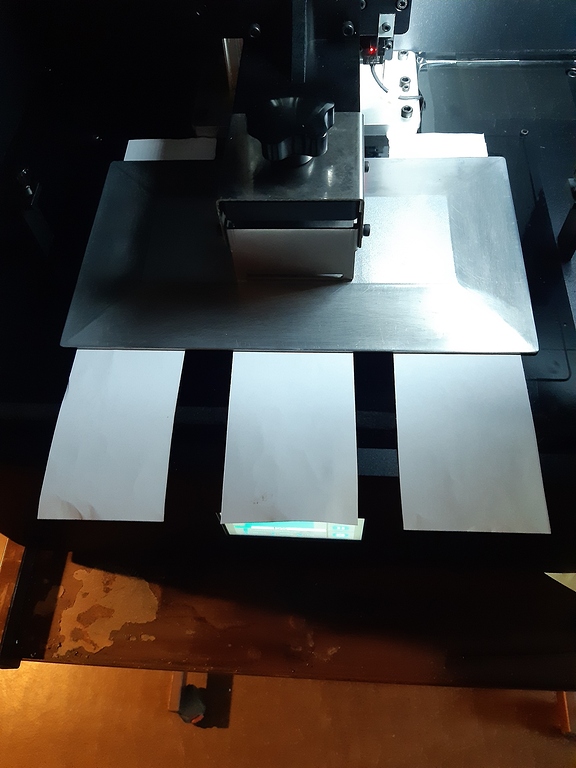 I have a question to PEOPOLY,
Is this pixel failure in the screen, or is it dirt on the underside?
is it possible to take the screen up without breaking it, the machine have only printed in about 20 haurs. It is a little difficult to take a picture, i have to focus it in one of the diodes. 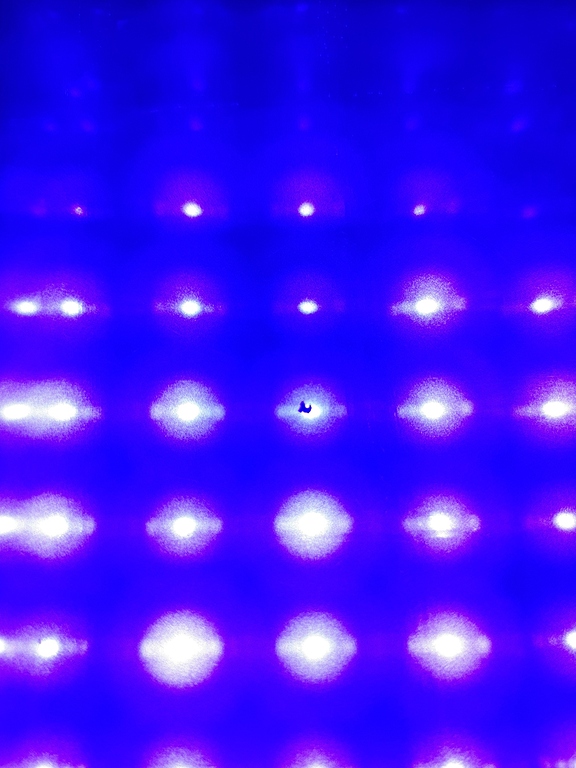 I have a question to PEOPOLY,
Is this pixel failure in the screen, or is it dirt on the underside?
is it possible to take the screen up without breaking it, the machine have only printed in about 20 haurs. It is a little difficult to take a picture, i have to focus it in one of the diodes.

hi, this is difficult to judge. Because the shooting angles are different, the pixels look different. You can take a test picture (small square) to check the LCD screen.