I’m experimenting with some custom g-code to release the print from the FEP with a straight vertical 5mm lift with no tilting of the vat. It’s kind of working - except the only way I can disable the tilt is to unplug the PM motor from the mainboard. I then set PM speed high to save time.

Second - the tilt motion is triggered on every z move - so I actually get 2 peels - unplugging the PM and setting PM speed high fixes this.

OK so there are 3 gotchas - the

lines reset something internally and me trying to fool it into raising Z between layers stops working after a few layers. If I remove all of the ;LAYER lines from the g-code it works exactly how I want - expect I get no indication on the LCD of what layer it’s on.

I noticed that there’s an M1004 gcode in the new firmware that’s supposed to trigger a peel motion - I’m wondering if there’s any G-code to disable peel/tilt… I tried messing the the PM reset position but the minimum value still seems to tilt.

I think it should be possible to have Z movements without triggering the peel motion. Have a look at this post and the 9 posts following it.

Your observation with the ;LAYER:1 line is interesting, because is a comment and it should not change the way the gcode is interpreted.

M1003 looks interesting but some experimenting with

actually does nothing with the latest beta - hopefully the final release firmware will have everything working as documented.

But if the firmware peels on every Z it finds in the gcode - then every z motion has to be done with M1003 - which would be doable but unintuitive - I’d rather see an M code to switch off peel for the current file (and have G91 work) which means simple gcode addition at layer change
G91
G0 Z5
G90
would work.

here’s a pic to show first test - Monocure standard black resin and a coat of epoxy primer on each.
left side is with peel and recommended FEP settings - right with no peel and just a 5mm lift between layers. 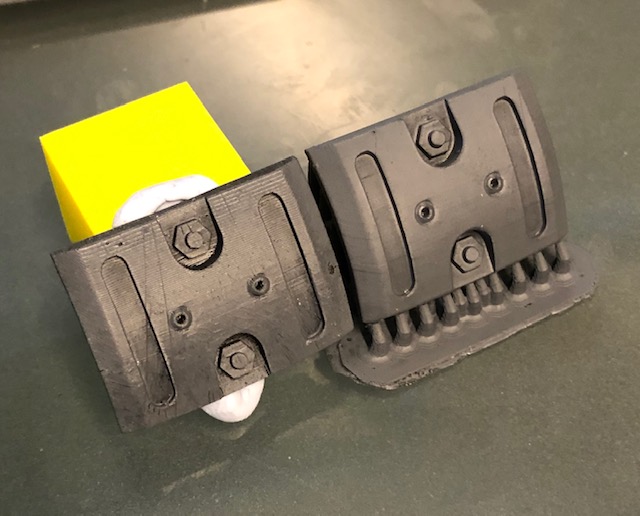 I’ll try something more complicated next

Great to see someone giving the beta firmware a try, & I have long been suspect the tilt peel causes a lot of problems with FEP. ( works great for PDMS )
Thank you for testing and confirming this.

Join the discussion on this thread regarding the ‘last’ firmware update thats going to happen shortly, Mark needs as much feedback / input as possible so we can get the moai & fep combo working as good as it can.

Hi Mark, sounds good. Please have also a look at the topic and point collection in the thread “Moai project update - fall 2019”

here’s a snippet of g-code at a layer change at 1.2mm - note that z is lifted to 6.2 then put back to 1.2 i.e every lift is 5mm above the current layer height

because there are 2 z moves - the machine tries to peel twice - which is why I have the PM wires disconnected and the PM speed set high so it doesn’t have to wait for each peel.

This only works if all lines with
;LAYER:
are removed - which fools the machine into thinking it’s on the first layer the whole time. If it hits a ;LAYER: line then it completely ignores the extra z lift after the second layer.

Thanks, it was the ;Layer line.
How do you modify your gcode?

thanks for testing. we are following this and want to improve the firmware.