One of my latest experiments has been adding small amounts of metal powder to resin to see if a metallic resin can be produced.

I first did some small samples of different clear resins (Photocentric and Makerjuice G+). I did a ratio of 5 grams metal to 45 grams of resin. I mixed each thoroughly and placed them in petri dishes (but only just enough resin to cover the bottom of the dish). I left them in front of a 50W UV lamp for about 10 minutes. I did the standard post cure process for each and the results were promising. I buffed each one up with some coarse steel wool and I was able to get a rough but buffed metal look.

The Makerjuice G+ has one of the highest tensile strengths out there so I decided to try a test print. Using the same 5g metal/45g resin ratio, I prepared about 180ml of the resin solution. Things appeared to be fine at first. I checked the print progress after about 6mm of supports. The supports had SOME metal in them but I noticed that the metal powder in the vat was settling to the bottom quite fast. I grabbed a small wood stirring stick and agitated the solution a bit. That was when the experiment revealed itself as a bust. The metal powder settled so densely that it was like half-cured cement in the vat. To make matters worse, the vat bottom made it difficult to get the metal powder moving (too much surface friction).

In the end, I had to toss the vat because the metal powder had basically contaminated it because the resin would not suspend the powder very well. I tried the Photocentric and made a 180ml of the metal/resin solution. It took about 3 minutes for it to become noticeable that the metal powder was not staying suspended.

I may attempt this experiment again using a finer mesh powder (the brass powder I have is 40 microns in size). I am also going to see how some of the mirror effect powders do in UV resin–hopefully they will not settle out of the resin.

Anywho, I just wanted to share what I’ve been trying. Hopefully this will deter anyone from trying this at the moment until a solution for the pigment settling is found. Unfortunately most of the resins just aren’t viscous enough to prevent the metal powder from settling to the bottom of the vat quickly.

40 microns seems rather large considering the Moai beam is 70.

I’d also -assume- a FEP bottomed vat would be less like to have the particles sticking to it?

I bought the larger sized powder because it was cheaper and to see if the resin would cure at all. You are correct that a smaller size would be better suited for the laser beam width. Finding a good source for smaller powders is at the top of my list.

As for the vat bottom type, I’m not sure if that would make much of a difference. The challenge right now is trying to get the metal powder to stay suspended in the solution longer so it does not settle to the bottom and basically “clog” the laser.

Unless the tough resins have a much higher viscosity than the standard resins, I don’t think you will find much that will work and still be “metal”. You will probably need to go smaller than 25um and still agitate to avoid settling, just not as much.

Also, which metal were you using? SLA resins use a photoactivator that releases oxygen species in response to the laser energy. The wrong metal, i.e. any one that readily oxidizes, may soak up the oxygen radicals and affect polymerization.

The use of the Makerjuice G+ was me hoping it would work as hoped since it is has a high tensile strength but costs less than the others. There’s another project I’m working on that needs that strength.

The focus right now isn’t curing since the petri dish test confirmed it will work with a 40 micron size. The challenge is keeping the powder suspended. Smaller particles would likely work better but until I get some of the smaller powder I can only speculate.

I’m using brass.powder at the moment. The resin cures fine regardless of this metal type or particle size.

a blade/wiper is likely needed for this type of resin. look forward to see your results.

A wiper would help but the sedimentation issue with the metal powder would cause it to get stuck in the slurry. The metal is almost like half-cured cement in the bottom of the vat when it rubs against the bottom.

I have found an alternative though. Not actual metal, but, well, I’ll post more info this weekend. I have a couple of test tubes that I’m monitoring to time how fast an alternative powder settles in the resin.

I don’t know exactly what your end product is supposed to be, but would it not be a lot easier to either electroplate or cold cast your resin print after wards instead of ruining vats?

One of my side projects is to SLA print replacement parts for an FDM printer. Makerjuice G+ is actually stronger than PETG so that’s why I’m using that resin.

Yes, cold casting would be easier. That would not accomplish anything new though. The reason why I am exploring ways of creating metallic resin prints is to figure out what new capabilities are around for SLA. Having a metal look right out of the vat opens up more opportunities.

perhaps you can test the tough resin when it is available (soon). Our tough resin has much higher viscosity that will carry particles better than watery resins. It is thicker than Peopoly standard resin

I may consider that if the price point is competitive with the Makerjuice G+. The only reason why I’ve been focusing on that resin primarily is because it is inexpensive, readily available, and has confirmed tensile strength numbers (I tested them at the local university).

If the price can’t compete with it, I’ll be honest, I won’t buy it.

I really like to know if you had any improvement in printing metallic resin with your printer. Due to my work, i’m very interested in the topic.

I’ve been working with incorporating metal powder into resin for a company I’m working at. I’ve had some luck getting decent printed parts and studying rate of settling (estimates with Stokes Law) got density gradient from a 7.5mm dia cylinder that was 2.5 inches tall (about 14.5 hour print)

Now that I’ve had multiple success at lower solids loading I’m trying to slowly increase the ratio. Which is where I’m struggling 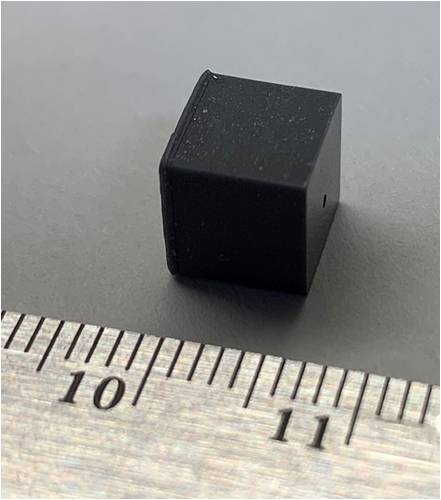 Did anybody have success with this?