Notice the movement along the left and right side have a little bit of a curve.

I changed the video to slow motion to make it easier to see the effect.

good work.
Im working on a circular based print test to see what distortion happens and hopefully I can correct it a little bit within Cura.

I wonder if instead of a flat acrylic sheet over the lazer , a lense /refraction/optimetrist specialist can probably calculate a domed or concave lense shape that would correct this?
Might be a bit tricky but ultimately would be a far simpler solution/ fix once the ground work / maths has been calculated .
or maybe a software code is written to distort the master stl file , to compensate for the distortion.
Looking forward to seeing what solution they come up with.

Is there any way to resolve this? I’m very interested to purchase the machine but accuracy is very important to me.

I heard a Beta upgrade is due in November from @peopoly, which is to help resolve this ?

we are working on a software (not firmware upgrade) for this correction. We hope to have it ready for field testing in Nov.

Hi, is there any solution for this geometry issue?
I use latest firmware 1.15, but the behavior remains the same…

it is being worked on and we hope to have a solution soon. It may not necessary be a firmware based solution

This is perfect to check. Thank you! I will run it tomorrow.

This looks like one of the Galvos has perfect alignment, and the other does not. Not to say the issue is the Galvo, but rather what that axis represents. If it were up to me, I would remove the acrylic cover over the Galvos and try the test again. If this fixes the issue, it’s a lens distortion in the acrylic cover. Change it out with a glass cover to correct the issue.

The galvo covers do nothing, it’s not an issue of refraction from the protectors

The galvo covers do nothing, it’s not an issue of refraction from the protectors

Technically, there should be no movement from the Y-galvo while the laser traverses along the X-axis. If the issue does not exist along the Y-axis, it makes little sense to find it along the X-axis. I’m about to run Lyndondr’s gcode to see if I have the same issue — as there was no mention here if software resolved this in v1.16.

Partially resolved. The issue is still prevalent for dimensional accuracy

Partially resolved. The issue is still prevalent for dimensional accuracy

I’ll keep at it. I’m now going to check the beam alignment on the galvo mirrors — and tell you what I find.

I have results from my tests. While I can get the laser pattern to match the template fairly close along the X and Y axis, the offset of the beam hits the galvo mirrors off-centre. The result is an egg-shapped circle that fits X and Y, but not in-between. Think of an oval on a 45˚ angle.

I have chosen the best orientation to minimize this effect, but without this, the effect cannot be fixed with software (that I can see anyways). The beam on my laser is simply crooked, and when it hits each mirror off the centre axis, it introduces an artificial offset by catching the edge of the mirrors instead of landing in the centre.

Is there a way to fix this laser module, or do I have to buy another one?

if you can share a quick scan video, that would be great.

also we believe we have chatted via email, can you follow up on the email with link to here?
Thanks

I’ve not been in the lab for a while (been really busy). But I’m hoping to get in there this weekend to examine things and post a photo or two.

To best describe the oval circle issue with a misaligned laser, I’ve attached a diagram to show the issue (in principle). 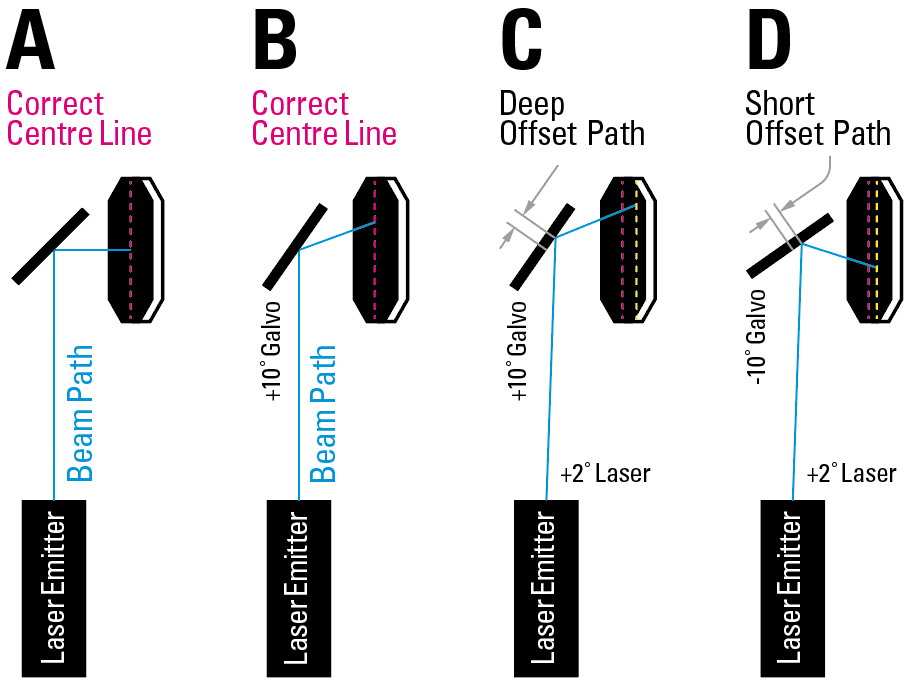 In this diagram you will see the correct function of the galvos with respect to a properly aligned laser emitter (A & B).
However, there are some geometrical challenges if your laser emitter is not straight. In this example I show a 2˚ divergence in the emitter path in both X & Y axis. This results in hitting the first galvo at a slightly different angle than expected. However, the real issue has little to do with angles, but more to do with divergence length. When the beam is offset in the X and Y axis (as mine was) the beam will strike the first galvo mirror at different distances pending the angle of the first galvo (C & D). So when the beam strikes the first mirror (at +10˚), the distance the beam travels from the emitter to the mirror is longer than when the first mirror is at -10˚.

So while you can turn the galvos mechanically and centre a square box with the vat surface, the arrangement will always be inherently distorted (sinusoidal parallelogram), and I fear a substantial amount of complex software will be needed in order to correct a simple error in the laser emitter assembly. I feel it would be far more productive to have a beam alignment feature in the mechanical design of the Moai. All you would need is a piece of card-stock with a target on it it — placed inside the opening of the framework on one side. Hit that beam in the middle of the target and then push the first galvo up into place: problem solved.

I would even design the part for you so it could be easily machined. Best of all, it would allow for a factory alignment step before packaging it for shipping — less risk for the user experience.

hi @Drexus thanks for the detailed post. let’s follow up on the email to get you laser replaced. can you reply to the previous email thread?